Readers have brought my attention to several articles on flag framing. Basically, "flags"are all data objects on the character sheet.

If you haven't done so yet, I urge you to go read these insightful articles by experienced gamemasters.

This article aims at clarifying the relationship between flags and systematic strategic exploitation through the THACOSG, and the manner in wich the strategic gamemastering method can be used to design plot hooks for preexisting scenarios.

Flag usage, especially as described in the last article in the above paragraph, does cover a lot of the ground also covered by the first article on strategic gamemastering. Flags, however, are not limited to the character sheet : everything on and outside the character sheet is a valid data flag and can be exploited.

Furthermore, the second installment of the strategic gamemastering articles goes further, by:

The THACOSG in comparison to other tools

The THACOSG tool is not a conflict web and has never been designed as such.

The THACOSG is a systematization tool designed to represent in a visual, efficient, and reproductible manner all GM mental processes related with the Shared Imagined Space at a specific time. The successive THACOSG diagrams over a campaign can show the evolution of the characters as well as that of the setting

The THACOSG incurs consequences for the manner in which the GM creates his adventures.

Being a systematization tool for any game data, not limited to the use of the PC character sheet flags, regular use of a THACOSG tool incurs further consequences in the manner the GM will read adventures & NPC descriptions created by third-parties: everything is a flag, including any and all data in an adventure and/or NPC fluff & stats, and the THACOSG-using GM will be decomposing said adventures and NPCs into their constituent objects (flags).

Let's try it with a quite straightforward adventure:
A herald announces that the princess has been kidnapped by a dragon, looking for vengeance after the kingdom's armies drove him from the land many years ago. The aging king offers a reward for whomever will rescue the princess and return her to her sire. Unbekownst to the king, his daughter the princess is in league with the rebel barons. They plot to overthrow the king and crown his daughter, using this kidnapping as a pretext to approach the king in order to assassinate him.

Decomposed into a THACOSG and combined with the preexisting character THACOSG rows, then color-coded for obvious commonalities, we obtain this: 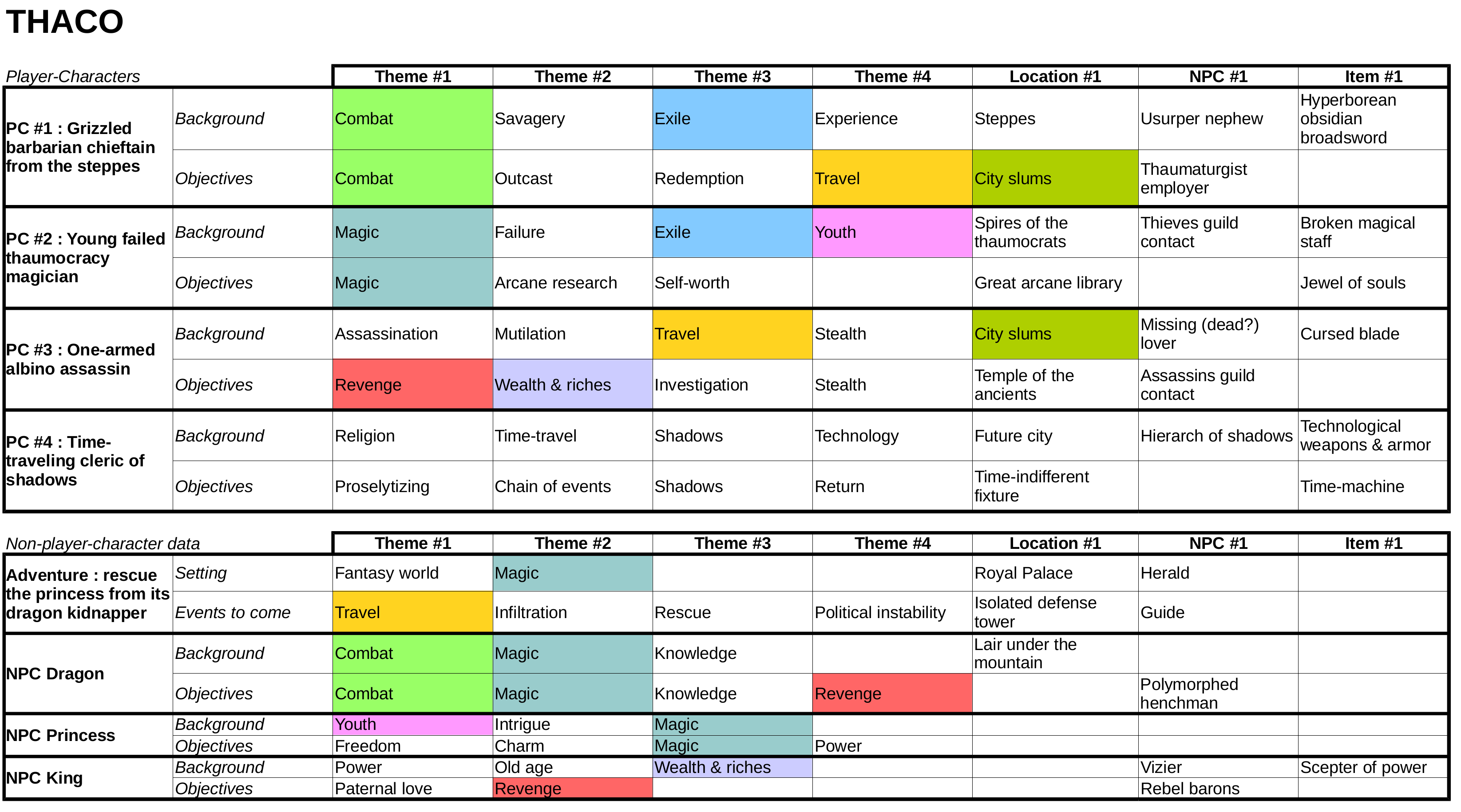 Note that the adventure objects are not decomposed into the Background and Objectives rows, but into "Setting" and "Events to come" rows.

The simple color-coding of identical objects makes the "Youth" thematic appear, which might bring some promising interactions between the two characters of the young mage and the princess. The dragon, of course, is the focal point of many important thematics.

For the next steps of remote linking & GM-decision linking, we've dispensed with the links that had been established between the player-characters, and focused on the links between the PC and the adventure. The result would look like this: 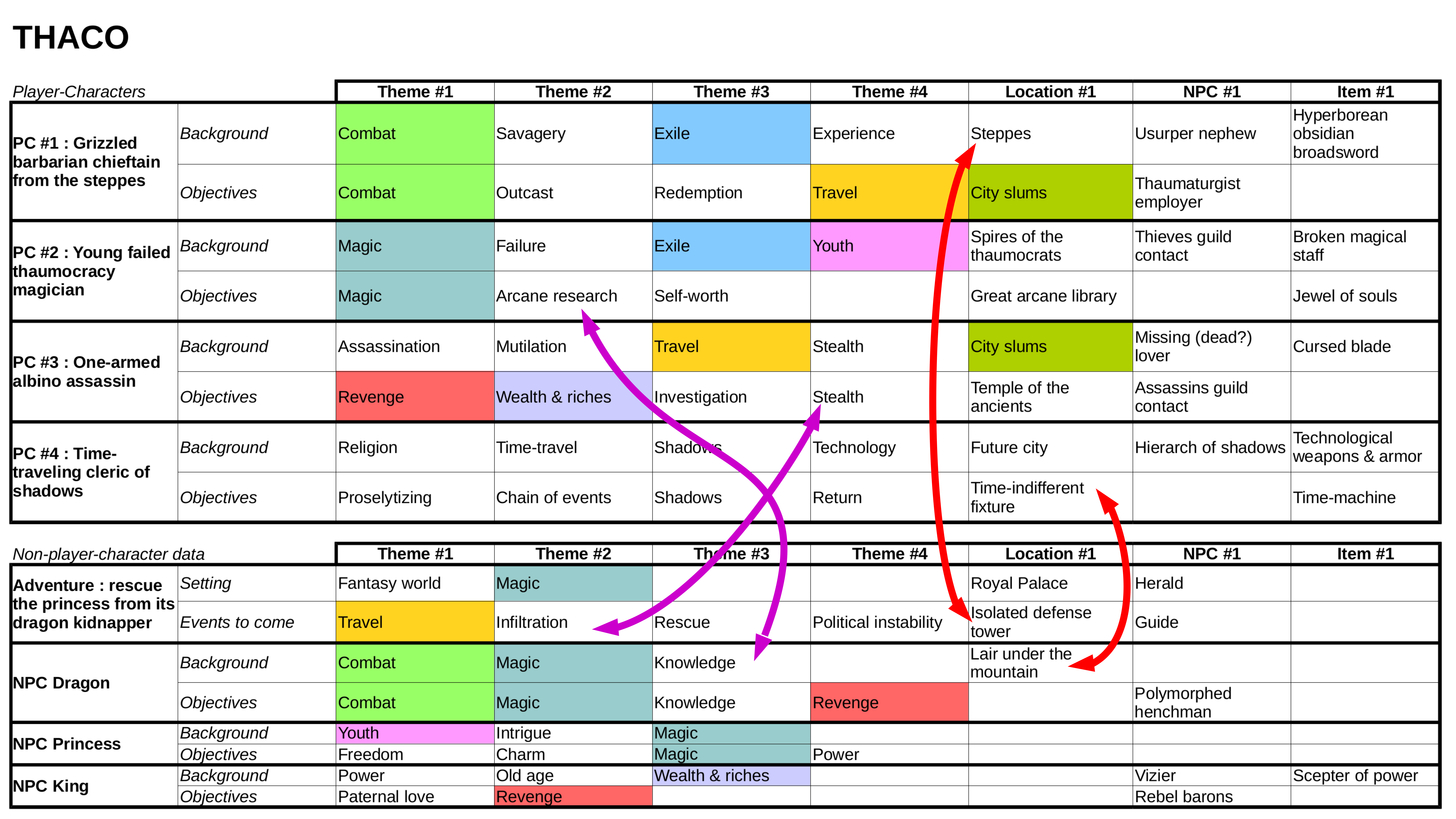 Only a few links are required to immediately perceive which angles might be the most effective to embroil the PCs into the plot. The assassination thematic in PC#3's background row would normally fit the plot by the rebel barons, and could be linked to the adventure "Political instability" theme, but depending on how the PC approach plot, such a link presents a risk of putting the assassin PC directly at odds with the rest of the group: this is an example of "Opposition linking" which I described in the second installment of the Strategic gamemastering article.

Let's (tamely) fantasize for a moment. What if adventures and NPCs were already decomposed before the strategic GM begins to work on his THACOSG?

Nothing prevents the writer of an adventure or an NPC from taking a few minutes to decompose said adventure or NPC into its elementary components.
These components would not be character cues or flags, but adventure and/or NPC cues.
If the author were to organize these elements in a simple THACOSG, possibly with a color-code for common objects, the GM could then directly add the adventure and NPC rows to his THACOSG.
The point is that this simple and admittedly obvious work, since no one knows the objects composing an adventure, a campaign and/or NPCs better than their inventor, enable the author himself to dispense with the tedium of having to create and list the plot hooks to his setting, scenario or NPC.
These plot hooks would become readily apparent as soon as the GM :

The only question that remains is whether adventure & NPC writers will pick up the practice of creating a synthetic table of the THACOSG objects in their own works, in order to speed up the process through which a GM gets hold of said adventure or NPC, and makes the PC interact with the associated plot.
I strongly hope that they do, because decreasing author effort while simplifying the life of GMs seems to be in everyone's interests.